Note from Azeem: This newsletter is in Alpha test, so I am trying a couple of different approaches this week. Please also take a moment to complete the feedback form.
Experimenting with

Moore’s Law is 50 today! Yes, 50 years ago Gordon Moore’s key paper, he outlined the exponential growth if transistors (with concomitant growth in computing power), was published. Can the law still hold?

Can Moore’s Law continue for into the far future? We are pushing the limits of the physics.

New structural MRI imaging of the brain has demonstrated that we can predict generalised intelligence with a very high degree of accuracy just by looking at MRI scans. An older piece of work, which I think is important to reference, shows dogs exhibiting similar types of conscious awareness to (human) children raising ethical questions about their rights. And switching to artificial intelligence, a great profile of Geoffrey Hinton, the Canadian professor who made breakthroughs leading to ‘deep learning’.

With a correlation (r2) of greater than 0.7, structural MRIs are surprisingly good at predicting IQ. This could end up having significant social implications if ‘intelligence’ becomes easily predictable through simple, instant physical measurements the way skin colour, body size, height or age are.

Brain scans show that dogs are as conscious as human children

fMRI scans show that dogs exhibit similar levels of awareness activity in key brain structures to children. It starts to raise the question about whether some for of limited ‘personhood’ and rights need to apply towards higher animals.

Deep learning and the revolution in artificial intelligence

Wonderful read about Geoffrey Hinton’s work and the development of ‘deep learning’ systems which promise to revolutionize the performance of AI systems.

Department of robotics (caring ones & how to kill them)

‘Caring robots’ tackle one of the few areas we generally agree humans currently beat robots: empathetic nurturing roles. A new super-cool personal drone is released; and Matternet launches an autonomous drone delivery service. At the same time, the military wants lasers to destroy all these drones if they go rogue.

The rise of caring robotics

Robots are commonplace in many factories but are rare in more caring roles. This is changing, and we should be pleased. Under our direction, caring robots could increase our humanity, not challenge it.

The 3D Robotics Solo may be the smartest drone ever

My buddy Chris Anderson (@chr1sa) has launched the smartest personal drone ever.

Drones get supplies to remote communities at lower cost and lower risk.

Drones development enjoy the CPU-benefits of Moore’s Law and the reduction in product costs of the learning curve and specialisation: this means more Drones. And coupled with less peace, a new burgeoning class of military threat. The solution: laser trucks.

Robots are getting smarter. They can now outperform even a McDonald’s burger flipper. Today we see job growth only in so-called “non-routine” jobs. The rise of the bots points to increasing shifts in (un)employment. At the same time, Harvard Business School Professor (& Priest of Capitalism) Michael Porter argues economic development needs social progress- prompting increasing calls (even from ardent non-socialists) for minimum income guarantees for humans. The challenges for educating a workforce for this world of AI are manifest, as the essay below identifies. 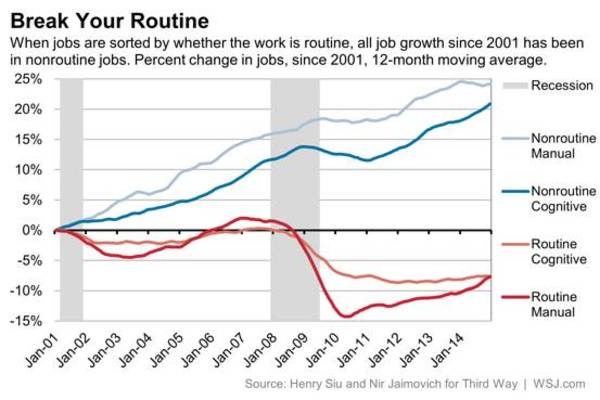 Is your job ‘routine’? If so, it’s probably disappearing

New research from Henry Siu at the University of British Columbia and Nir Jaimovich from Duke University shows just how much the world of routine work has collapsed.

The Future has lots of robots, few jobs for humans

The robots haven’t just landed in the workplace—they’re expanding skills, moving up the corporate ladder, showing awesome productivity and retention rates, and increasingly shoving aside their human counterparts.

Educating humans in an age of artificial intelligence

As this new world emerges, educators are asking what students should be learning as it becomes increasingly clear artificial intelligence and robots will be performing the majority of jobs currently occupied by humans.

Economic growth has lifted hundreds of millions of people out of poverty and improved the lives of many more over the last half-century. Yet it is increasingly evident that a model of human development based on economic progress alone is incomplete.

This could easily be called “watch how Netflix takes over the world.”

A long read, but really worth doing so. It shows how Netflix is overtaking HBO and how its business model will allow it to scale much further and faster (and ultimately more profitably). If you want to understand ‘disruptive, exponential’ business models this is useful case study (which perhaps give more airtime to HBO than it deserves).

Yet more fresh, unfettered thinking from Netflix - which uses local piracy rates as a way of determining local subscription prices.

Dept of the quotidian weirdness

Smart toilets and smart remotes: the home of 2020 will have more than 500 smart devices.
In-flight wi-fi could be hacked and so poses a threat to aircraft (overblown fear designed to funnel research funds into military programmes. Real threat as GW, Vincennes & MH17 has shown are old technologies with people breakdowns.)
In the age of Meerkat and Periscope, a profile of JenniCam, one of the original live cammers who has shuttered her stream.
Whistling has been disrupted by mobile phones. Who would have thunk it.
Keep your car keys in the freezer or risk losing your wheels.

Smart toilets to smart remotes: the explosion of smart stuff in homes

Internet of things prognosticators, Gartner, say 500 devices per home by 2020.

In-flight Wi-Fi is a 'direct link' to hackers, warns US report (Wired UK)

Aeroplanes with in-flight Wi-Fi are vulnerable to hacks by passengers and could be targeted by a “malicious attacker” on the ground, a US report has warned

Jennifer Ringley was the first person to broadcast her life online.

Demise of whistling in Britain is blamed on smartphones and headphones

tl;dr: You need to keep your car keys in a Faraday Cage, like a freezer, or your wheels will get boosted.

Please fill out the feedback survey!

Also please make sure you forward this newsletter to at least one friend who might enjoy it.