Exploring why blockchain might fundamentally change the Internet through decentralisation. Thinking about ethical models for AI systems. Is the gig-work economy real? And more whacky images out of neural nets.

Dept of the near future

👀 Eye-opening essay on how the Blockchain might redefine the entire internet and every application that rides on top of it. Must read

✋ Designing ethics in an AI world will force us to confront ethical choices we’ve tried hard to avoid (except amongst academics). Do we choose rule-bound AIs with human-readable trade-offs or machine-learning-based AIs whose behavioural parameters are learned from experience (and inside a black box)? Recommended read

🍹 Artificial liquid food might be healthier for us and better for the planet. It’s also exploding as a business. (Wordy blog post in dire need of an edit but worth a read.) Also the rise of entomophagy brings protein-rich insects into milkshakes.

😡 “Let’s reclaim the economy from appholes” demands Umair Haque, in The Servitude Bubble

💰 How companies get valued Tweetstorm by Marc Andreesen fast read

👾 Vivek Wadhwa described when we might see human-like robots amongst us each capable of undertaking useful tasks.

I curate Azeem’s Exponential Digest on the weekend while my kids do homework. It’s a hobby that needs your support. So a request to more recent subscribers, please do recommend this to three friends or colleagues who you think would enjoy it. (E-mail recommendations work best but Twitter and Facebook also nice.)

Dept of the blockchain

The excellent IEEE Spectrum essay explores how the blockchain could inveigle its way to improving core internet services. The core notion is that the distributed ledger allows us to ensure trust in a truly decentralised way. The Internet’s key design object was to survive nuclear attack. The need for resilience is what led to the distributed design pattern. But certain core features, like the IP address space and DNS lookups were never decentralised. Not out of lack of will but because we didn’t have a good solution. Even early peer-to-peer products (like Skype and Napster) relied on managed super-nodes or centralised directories. The reason distributed trust across the blockchain is exciting is because it answers a 50-year old conundrum: how do you really decentralise the network without having single centralised service lurking at the top?

And Vice reckons energy costs for bitcoin mining are exploding so fast they might get unsustainable. Processing bitcoin transactions may be more energy intensive than processing VISA transactions.

I’m glad that a small effort is going to understand the ethical questions around designing AI services. Read the Elon Musk initiative or the Bill Gates warning for two. Many people working in AI argue that most of todays AI systems are very far from being able to make choices that harm humans.
This TED talk shows what an ‘autonomous car’ sees as it drives around and gives some flavour for how a state-of-the-art system understands threats

We are also learning that poor system design can be abusive or dangerous. For example, Google’s Photos app identified black people as gorillas.

This reflects some of the dangers of the process by which AI services are designed. Ultimately, this issue would be about the training data fed into the systems and how well the human operators set the objective function. AI systems could thoughtlessly amplify prejudices (latent or explicit) in the real world or simply be designed to chase some biased outcome.

(😋I will host an Exponential Dinner on AI ethics in London in September. If interested, please email me now with suggested agenda items and speakers/attendees.)

Are Confucian notions of personhood that are driving Chinese research into optimising human embryos?

Craig Ventner’s team has been able to control a bacterium with synthetic DNA. This may open a new class of biomanufacturing for drugs.

🐷 Genetically-engineered super pigs will produce more bacon. Now if we can engineer them not to feel pain, we’ll be on to something.

A third of all European consumers saying they will participate in the a ‘sharing economy’ service in 2016.

Should contractors in the 'gig’ economy be treated like employees? If not what kind of benefits should they have? Nice essay in the New Yorker.

A lower Californian court concluded Uber contractors can be treated as employees in some situations. Shyp is turning its gig-contractors into employees next year.

The 'gig economy’ may have captured the mind’s of the media, but for now self-employment remains at historical lows in the US. Interesting graph 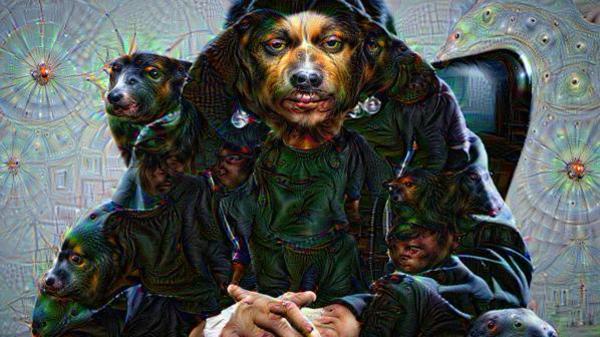 Great introduction to microservices and how they will rapidly increase the pace of innovation in the industry (and as argued elsewhere support the growth of Artifical Intelligence.) Micro-services are boring but important.

🌻 Ramez Naam points out that solar power is now half the price of the DEA’s June 2015 prediction, and cheaper than new coal plants per MWh

An old paper visualising the growth of partisanship in US politics.

A six-metre 3-d printer is printing a beautiful building in Dubai.

👨 Good-looking men get the most venture capital. Groan.

😠 Ad targeting will increasingly follow us from device to device. This is how it works. At the same time, the digital ad industry is struggling with a $7bn a year fraud problem.

The eight best machine learning cheat sheets, because not all of us have the time to do a PhD in Computer Science.

The future of inflight entertainment is…. iPads. Nice read for aviation geeks.

What I talked about

Samim and I had a discussion about generative AI and neural-net ‘art’ earlier this week. We recorded it here. (One hour long, poor quality line, sorry.)

Thanks for reading
As always feedback directly to me azeem@azhar.co.uk. (Give me a few days to reply). Or check my LinkedIn bio or About.me page.